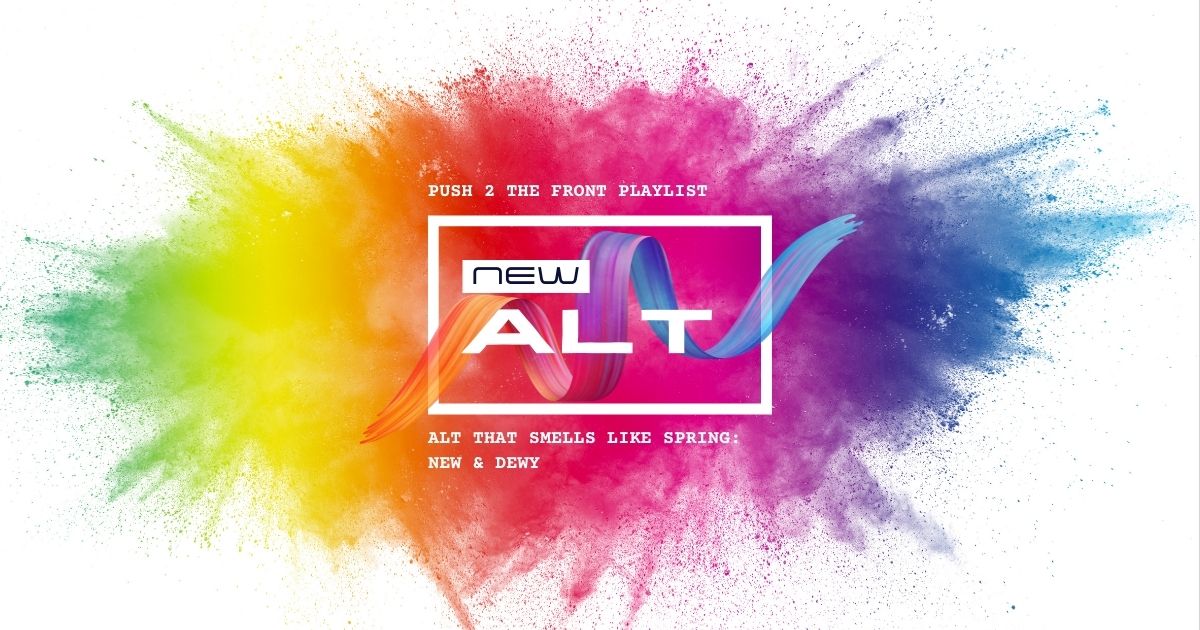 Push2theFront is back: vaccinated, boosted, masked, and hitting live music venues once again with a vengeance.

To celebrate, I made an awesome playlist of mostly new stuff. Alt-rock, alt-pop, alt-whatever. I started when it was really cold here, like below zero nonsense that makes one dream about beach vacations and you end up googling music festivals. So I began a play list for you (mostly for me) of happy, more upbeat stuff. If it feels like spring, even better. If it smells like grass, PERFECT! And I kept going, so now it’s a pretty hefty list. But don’t worry, you don’t have to lift it to listen to it.

I do NOT apologize for the alt-pop leanings of this list. I am, after all, a child of the 70-80s that cut teeth on Leif Garret, Donny Osmond and Shawn Cassidy. The fact that I evolved into grunge, new wave, and some punk is owed only to tragedy, grief, and heartbreak. (Curious? Want the backstory? see Fire and Rain blog).

I hope you enjoy listening. I have. New music is always a fun present. See, I love you so much.

Here’s some background on a few:

I admit, I’m as obsessed with COIN as Al is with tangerines (thus, their new single, “Cuties” sitting today on Billboard’s Alternative Airplay chart). This latest single follows their last, “Chapstick”, which frontman Chase Lawrence describes as “a combination of sounds…like you fed hours of 60s, 70s rock into a computer & politely asked them to pick up in 2023.” I’m not sure that’s entirely true, but damn close gentleman. This trio from Nashville met in college and wrote four songs and shared them online (for free) to get gigs. They had just started the biggest tour of their life when things shut down and Lawrence moved back into his parents house in West Virginia. Locked in his childhood bedroom, gorging on Oasis, George Harrison, and ’70s R&B, he says they set out writing mostly remotely to “make something that we otherwise would have no purpose to make in life times past. In a way, we were showing how we got to where we are, kind of working backwards to show where we are now.”

Saw these guys live at the Armory and exhausted myself dancing and singing really loud back-up to “Talk to Much”. I will admit, we did hang upstairs for this one. (video on my insta)

(COIN also in: Bands Your Kids Are Listening To (maybe you should too…)

Sultana describes the soulful 14 tracks on their new album Terra Firma, as “Erykah Badu meets Bon Iver, meets John Mayer, meets whatever”. The “whatever” might be my favorite parts.

Here’s the hype: Sultana’s grandfather gave them a guitar at the age of 3. By 13, they were using a fake ID to play at open mic nights. Teachers, getting whiffs of cigarettes and beer, warned them that they weren’t going to amount to anything if their grades didn’t improve. But despite a psychotic breakdown, they finished high school and took to busking with a one-person set up (electric guitar, RC-30 loop station, milk crates, and a wagon). Anyone that understands the life of a young street musician, knows that it takes an incredible work-ethic, persistence/patience, and elephant thick skin to land a manager, record an EP, and launch a tour.

Here’s what happened in between graduation and her upcoming gig at the Palace: a seven-month long drug-induced psychosis, 7 years busking, a bedroom performance of their psychedelic-reggae song Jungle that garnered a million YouTube views in five days (now at 135 million and growing, amazing considering the vocals don’t kick in until the 2-minute mark), becoming the first artist without a debut album to sell out three nights at London’s Brixton Academy, and now- performing around the world.

Tash describes life at 26, “I’m the least rock’n’roll motherfucker that you ever see. I’m all for nine hours’ sleep and vitamin infusions and meditation and all of that type of stuff.” Well, I’d say it’s pretty rock’n’roll to play 20+ instruments and lug them all around the globe. Better catch them while you still can.

I first heard Spoon’s “Turn my Camera On” when I was in the kitchen cooking listening to a Pandora playlist (that long ago). It passed the dancing in the kitchen test. It was amazing and I was an instant Spoon fan. Gripping a spoon is one of the earliest milestones in our life, so….

Spoon’s latest Lucifer on the Sofa rocks, in every sense. It’s become my favorite of all their records. Leaving the electronic noodling of “Hot Thoughts” and “They Want My Soul”, these songs swagger. Actually, they reek of sex. On “Satellite”, Danielle teases, “I know where you draw the line/I know what you draw it for.” Danielle’s is all about the pose. This albums vibe suits him well: old-fashioned rock & roll licks, little Eno/Nick Cave/the Who/Prince/the Kinks. Texas indie rock at it’s best.

Mr. Daniels definitely moves me in mysterious ways. He reminds me of my cat, a menace, but so damn charming, I keep him around, throw toys on the floor, and make sure he’s fed well. (RIP Ollie, wrote this a bit ago.)

This site uses Akismet to reduce spam. Learn how your comment data is processed.